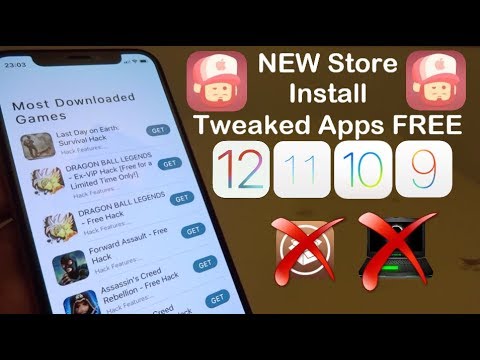 lots of people talking about which is the best source to download full and paid ios apps you may know about famous names like ,, helper, pc,app cake and app but unfortunately they are now not working at latest ios versions like ios 11 and ios 12 and will not work for upcoming versions of apple ios 13 so in that case we ‘ve searched and get to know there are few working app stores for ios 12 which have full and paid apps and some tweaked apps like youtube++,snapchat++,facebook++,whatsapp++ and many many more apps for ios 12 , the good thing is you need any pc for these app stores to get worked on your iPhones or Apple devices – so let’s get started –

TutuApp is a free application for iOS devices. where Users can download paid apps for free and in high speeds using this amazing app for ios – this app will work on Safari browsers only so you have followed these steps to get this working –

1 > open this link in your iPhone or ios devices

3> after that go to your device,s settings app then tap general then device management &trust the certificate.

How to get paid apps without jailbreak ios12

Zestia Extender is another online app that you can install directly from safari for ios, it’s basically a web app where you don’t need any special or specific permissions to install apps and paid games for ios 12 and below.

How to install Zestia App :

1- open this link from your i device or any ios devices which is running at ios 10 to latest ios version which is ios 12 now, after that click install you will get a message prompt asking for your passcode to modify ios settings just accept it by entering your current passcode ,now you will see a new icon at your ios screen tap on that icon and there you will be able to see and select your desired tweaked , plus +apps, games modified ios apps ,modified ios games and many more sections where you can download and install apps and games without any jailbreak or Cydiaa in ios 12 and other ios versions also

for ios 12 is a premium service and store for ios apps and games where you have to pay to get things working .they will collect your device,s to get you registered after that you will be able to use store on your ios device , the main thing is they are offering very clean and premium UI you can have a look store here

That’s it, for now, we will add more ios jailbreak and Cydia alternatives soon when we got working apps so stay tuned –

Manage your privacy
To provide the best experience, we use technologies like cookies to store and/or access device information. Consenting to these technologies will allow us to process data such as browsing behavior or unique IDs on this site. Not consenting or withdrawing consent, may adversely affect certain features and functions
Manage options Manage services Manage vendors Read more about these purposes
Manage options
{title} {title} {title}
%d bloggers like this: